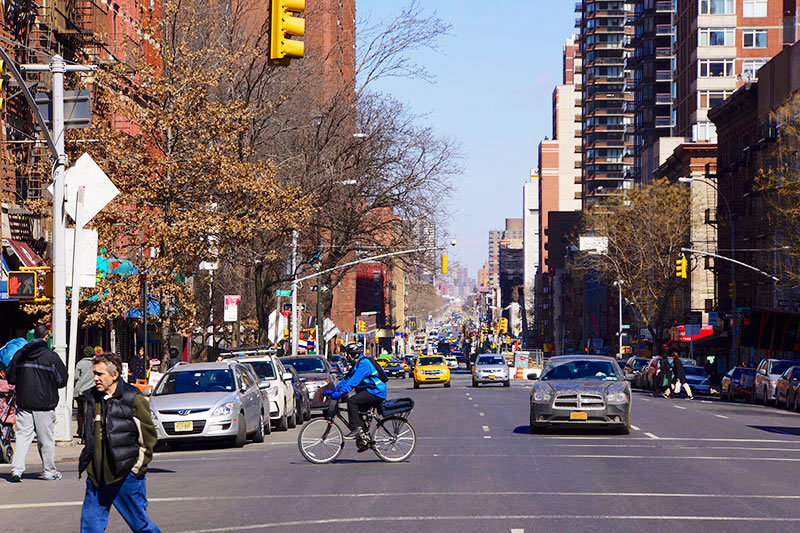 A must stop …..at our favorite neighborhood coffee shop…. 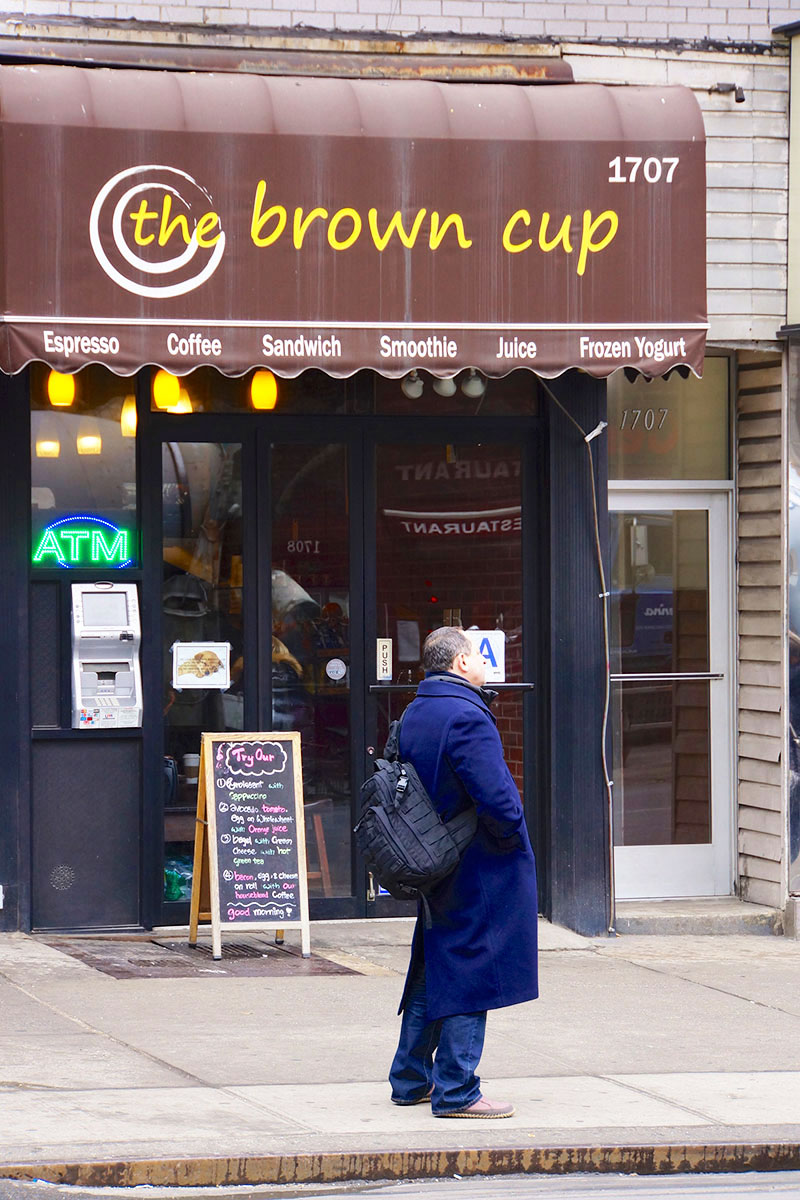 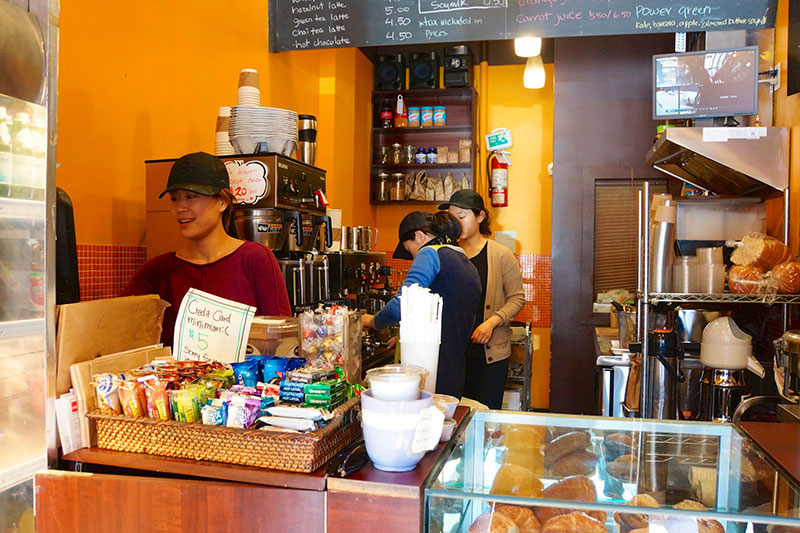 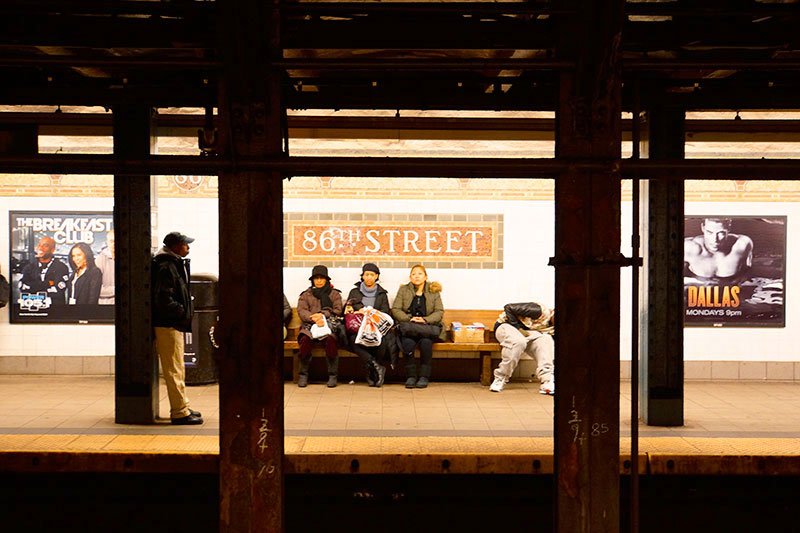 Sing your heart out on the High Line….. 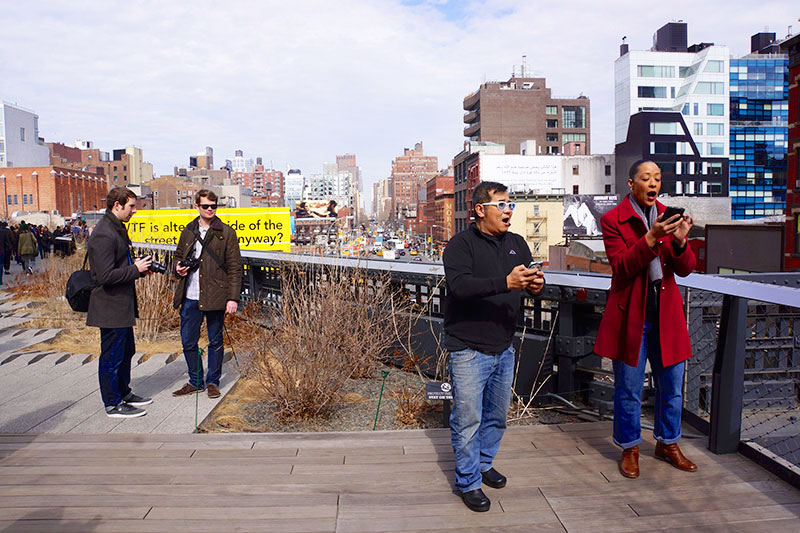 The High Line is a 1-mile…New York City linear park built on a 1.45-mile …section of the elevated former New York Central Railroad spur called the West Side Line, which runs along the lower west side of Manhattan; it has been redesigned and planted as an aerial greenway. A similar project in Paris, the 3-mile, Promenade plantée, completed in 1993, was the inspiration for this project. The High Line currently runs from Gansevoort Street, three blocks below West 14th Street, in the Meatpacking District, to 30th Street, through the neighborhood of Chelsea to north of the West Side Yard, near the former connection with the Amtrak-operated Empire Connection, as well as just southeast of the Javits Convention Center. 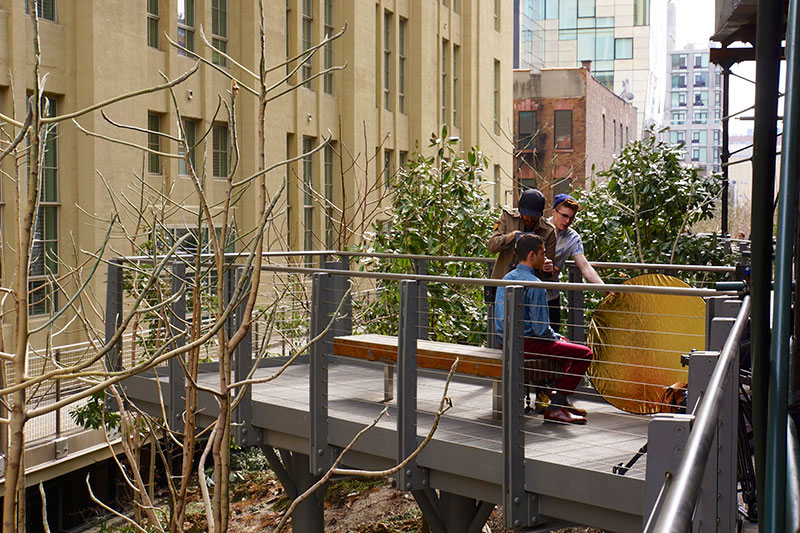 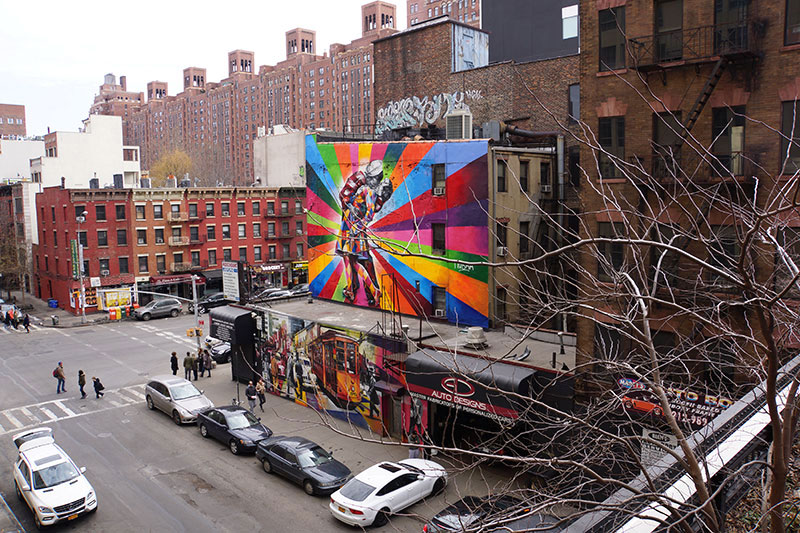 The Armory Show … the Grandest Art Show of them all….. 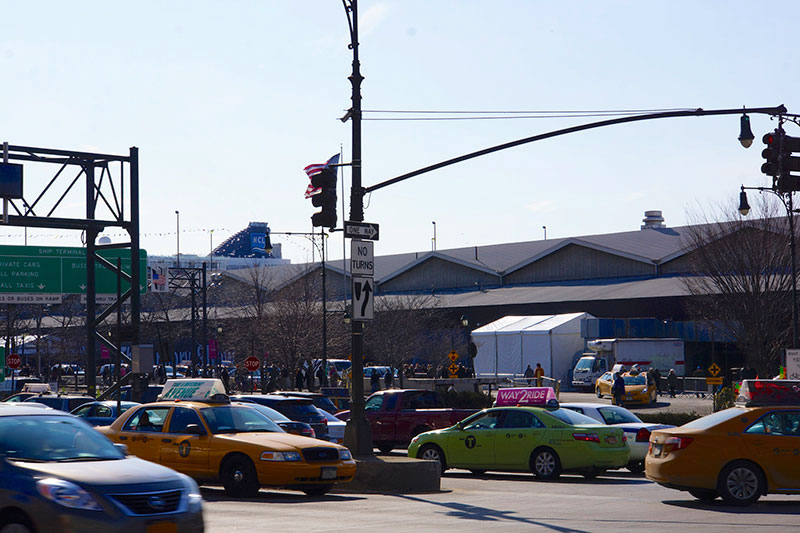 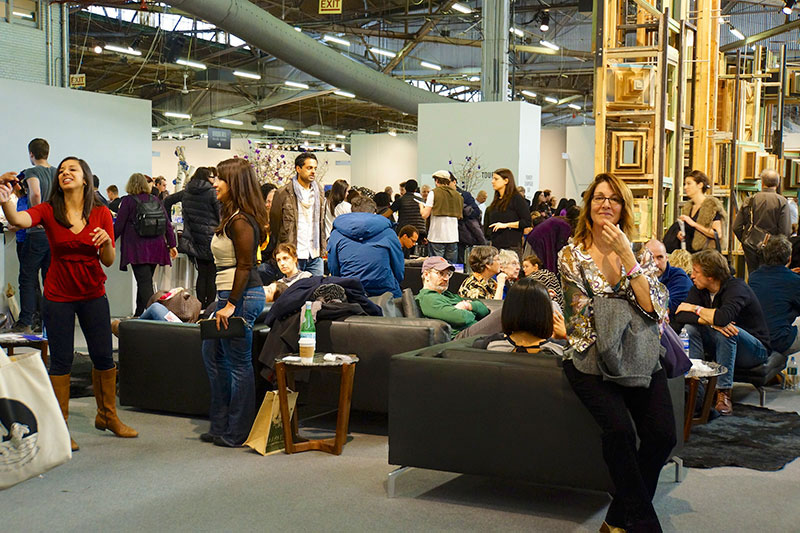 New York’s largest art fair, The Armory Show, features modern and contemporary art from 205 galleries representing 26 different countries. Thousands throng to Pier 92 to browse, buy — and be seen. Here’s how to survive one of the busiest weekends in the art world’s calendar, and if you can’t make it in person, how to experience the show virtually.

To my dear son, Denny, who, in college, when life is void of any housekeeping at all, had the first Zomba ever, in spite of himself…….you were just one step shy of rich and famous…..opportunity missed…..? 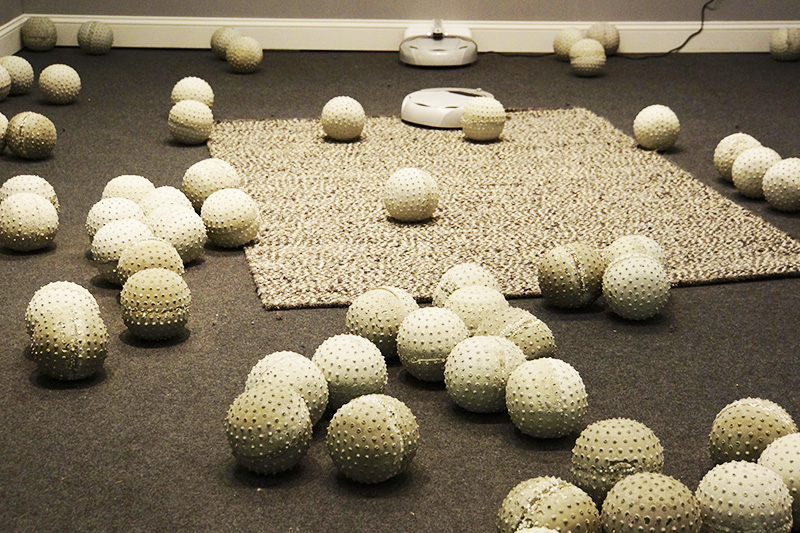 Back in Focus, a round, robotic vacuum cleaner was swerving around the booth belonging to Hong Kong-based Gallery Exit. Like a cross between a household appliance and a horseshoe crab, it stubbornly was butting against gray spiky balls scattered around the booth. They were enlarged dust particles, explained dealer Arianna Gellini, but they were meant to evoke explosive mines. “He was interested in creating a stage and creating an environment between a domestic setting and a war zone,” she said of the artist, Nadim Abbas, who was born in Hong Kong. The company that makes the droid-like vacuums reportedly also makes military supplies.

Does this look familiar? 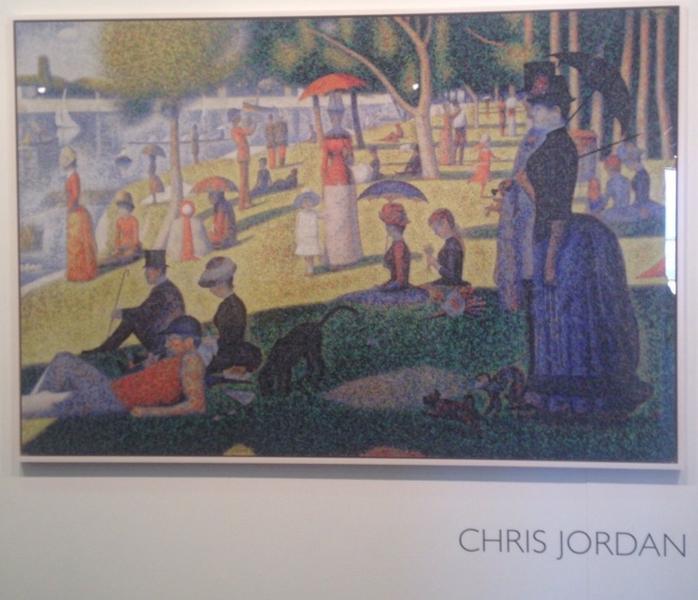 This rework of Seurat’s pointillist masterpiece depicts 400,000 plastic bottle caps, equal to the average number of plastic bottles consumed in the U.S. every minute. The digital pigment print is selling for $16,000

You have to do everything for the first time just to figure it out.   The size of the crowd, the length of the line to get in (a security guard let daughter Margaret and I in using a back elevator) and the excitement around this show, was overwhelming.  I’m afraid I was so distracted from people watching, that I’m not sure how much I learned about art??  Next time…..

What are the chances….that a favorite place for martinis is RIGHT next door to the brown cup…?  I love New York! 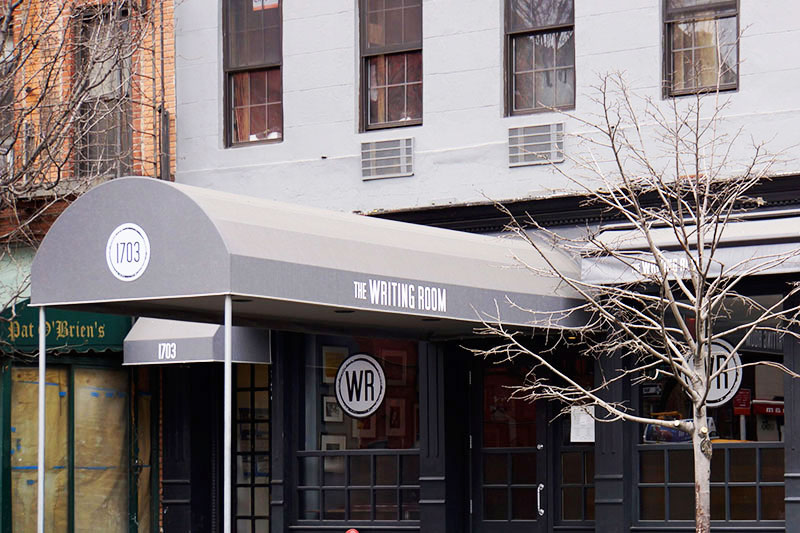 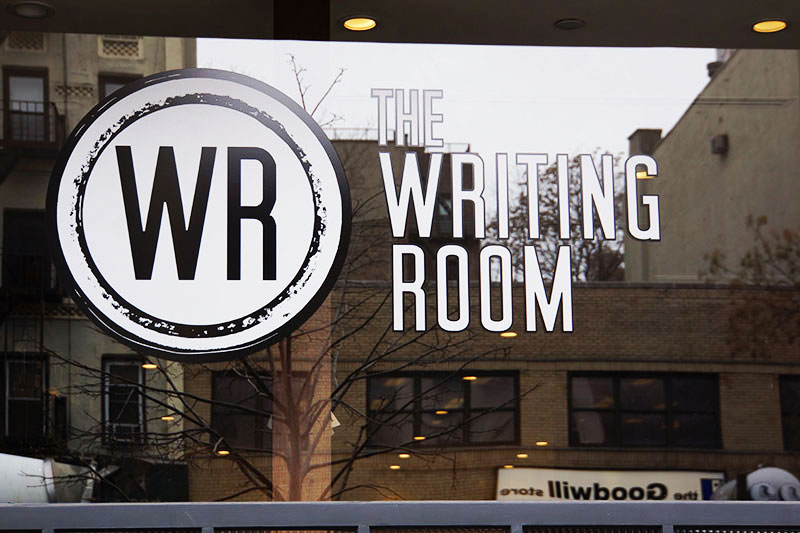 And..what are the chances that over our delightful visit at the bar, while enjoying our perfect extra dry vodka martinis,  I came to realize that my first magical trip to NY, as the Director of Promotions for the Denver Nuggets Basketball Club, took me to this very place, where I sat next to the one and only Charles Nelson Reilly, no less……ha!

The swanky canopy will be out front again at 1703 Second Avenue at 88th Street, braving East River winds with new fabric popping on the original frame…..

… the Writing Room, … the former spot of one of the nation’s most celebrated A-list hangouts. It was a 48-year-long party, from 1963 until the final nose-dive in 2011, nearly six months after the restaurant’s formidable proprietor, Elaine Kaufman, died at age 81.

The closing of Elaine’s represented the end of not just a restaurant but of something more — an era of the city when writers were as famous as movie stars, when the goings-on at a little spot at 1703 Second Avenue just north of 88th Street became the stuff of legend, or at least headlines.

Can’t leave New York without a little food for the soul…a quick trip to Central Park ……..

Did you know that Central Park has 36 Arches?  No two are alike and each is more intriguing and beautiful than the next.  They were designed to separate the pedestrian, carriage and horse riding traffic.

If you are reading this on a tablet at a time when you have some leisure, this is a delightful description full of interesting information.  New York City’s Central Park by Louise Slavicek 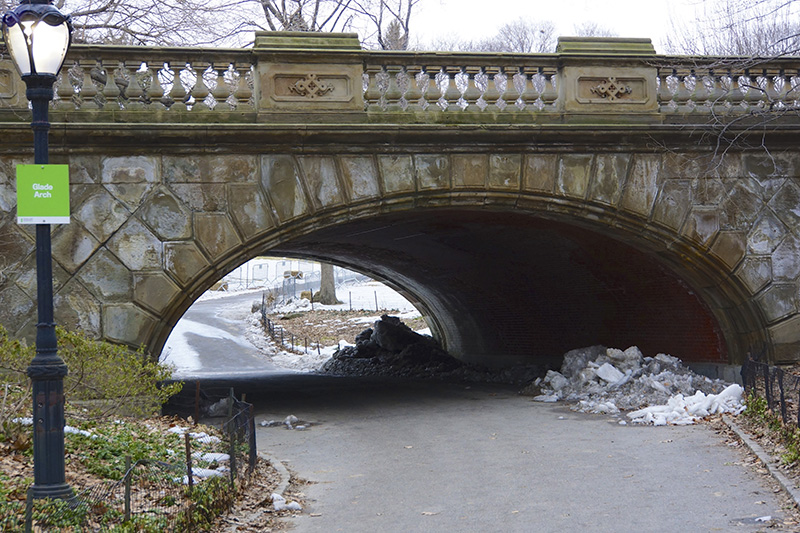 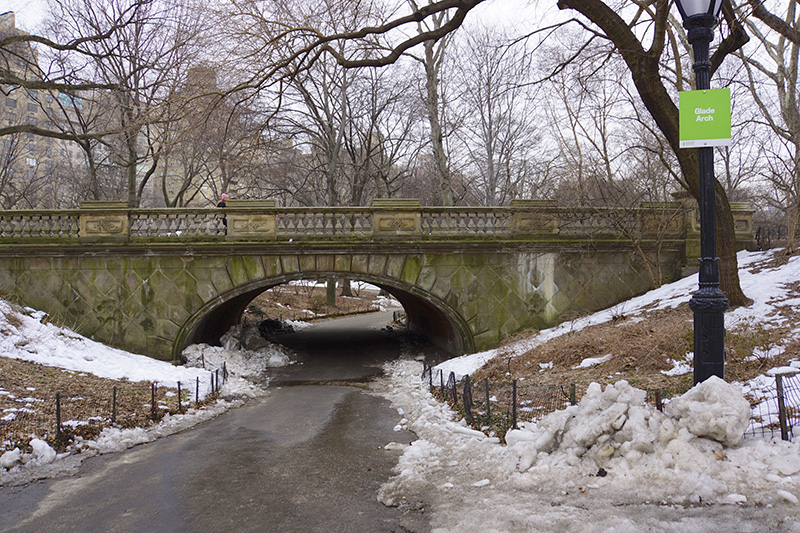 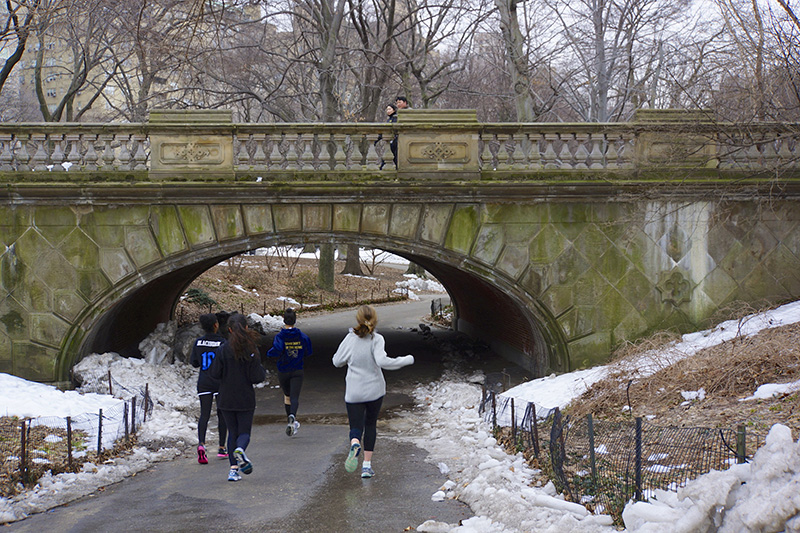 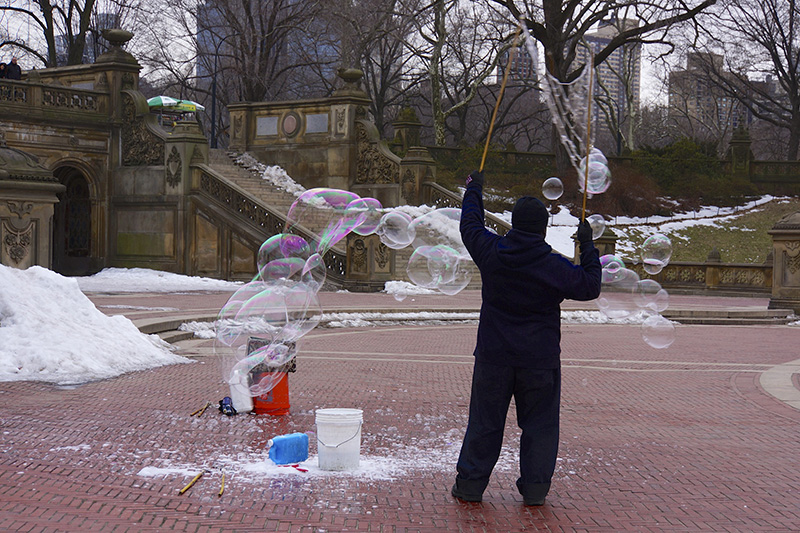 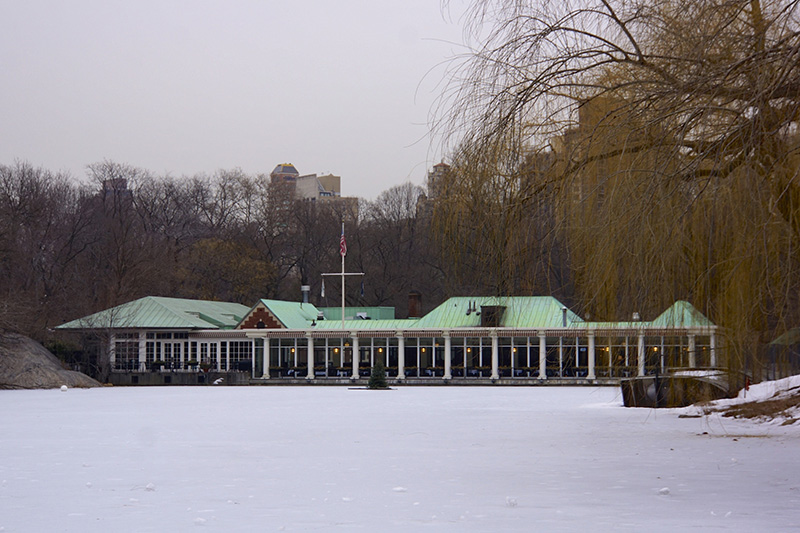